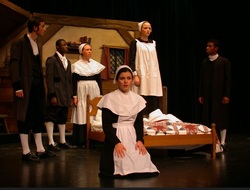 By Arthur Miller
​The story focuses upon a young farmer, his wife, and a young servant-girl who maliciously causes the wife’s arrest for witchcraft. The farmer brings the girl to court to admit the lie—and it is here that the monstrous course of bigotry and deceit is terrifyingly depicted. The farmer, instead of saving his wife, finds himself also accused of witchcraft and ultimately condemned with a host of others. 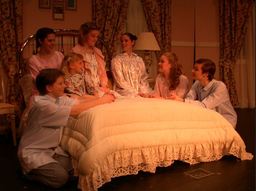 The Sound of Music

Music by Richard Rodgers, Lyrics by Oscar Hammerstein II, Book by Howard Lindsay and Russel Crouse, Suggested by “The Story of The Trapp Family Singers”
The final collaboration between Rodgers & Hammerstein was destined to become the world’s most beloved musical. When a postulant proves too high-spirited for the religious life, she is dispatched to serve as governess for the seven children of a widowed naval Captain. Her growing rapport with the youngsters, coupled with her generosity of spirit, gradually captures the heart of the stern Captain, and they marry. Upon returning from their honeymoon they discover that Austria has been invaded by the Nazis, who demand the Captain’s immediate service in their navy. The family’s narrow escape over the mountains to Switzerland on the eve of World War II provides one of the most thrilling and inspirational finales ever presented in the theatre. The motion picture version remains the most popular movie musical of all time.