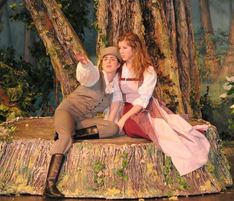 By William Shakespeare
Anything can happen in the forest. Fair Rosalind loves the handsome Orlando, but first she must school him in the ways of love and see that every one around her lives happily ever after. This comedy looks at the complications of love, as mistaken identities, hilarious misunderstandings, and even a little wrestling help to keep things interesting in the forest of Arden. 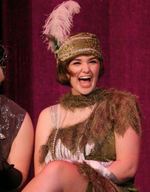 Book by Richard Henry Morris, Music by Jeanine Tesori, New Lyrics by Dick Scanlan.
It’s the zany new 1920’s musical that took Broadway by storm! West Theatre students are already taking tap dance classes to prepare for this smash Broadway hit. Taking place in New York City in 1922, Thoroughly Modern Millie tells the story of young Millie Dillmount, who has just moved to the city in search of a new life for herself. It’s a New York full of intrigue and jazz – a time when women were entering the workforce and the rules of love and social behavior were changing forever. Based on the popular movie, the stage version of Thoroughly Modern Millie includes a full score of new songs and bright dance numbers. Filled with frisky flappers, dashing leading men and a dragon-lady of a villainess audiences will love to hate, Thoroughly Modern Millie is a perfectly constructed evening of madcap merriment. And with the role of Millie Dillmount, musical theatre has found a new heroine for the ages in Thoroughly Modern Millie.