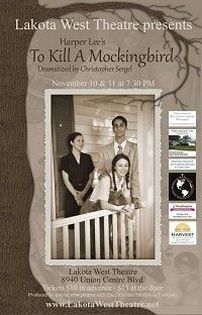 To Kill a Mockingbird

Dramatized by Christopher Sergel
from the Book by Harper Lee
Licensed by Dramatic Publishing
​
​”Scout, a young girl in a quiet southern town, is about to experience dramatic events that will affect the rest of her life. She and brother, Jem, are being raised by their widower father, Atticus, and by their strong-minded housekeeper named Calpurnia. Wide-eyed Scout is fascinated with the sensitively revealed people of her small town, but from the start, there’s a rumble of thunder just under the calm surface of the life here. Set in 1935, this play illustrates the social issues of this time-period as the black people of the community have a special feeling about Scout’s father. In her youthful innocence, she does not know why. A few of her white friends are inexplicably hostile and Scout doesn’t understand this either. Unpleasant things are shouted and the bewildered girl turns to her father. Atticus, a lawyer, explains that he is defending a young (black man) wrongfully accused of a grave crime. Since this is causing such an upset, Scout wants to know why he is doing it. “Because if I didn’t,” her father replies, “I couldn’t hold my head up.”  When she asks why Atticus would take on such a hopeless fight, he replies, “Simply because we were licked a hundred years before we started is no reason not to try.” He goes on to prepare Scout for the trouble to come. “We’re fighting our friends. But remember this – no matter how bitter things get, they’re still our friends.” Things do get bitter, leading up to drastic measures as Atticus props himself in a chair against the cell door of the man he’s defending to confront an angry mob. Horrified, Scout projects herself into this confrontation and her inconvenient presence helps bring back a little sanity. Atticus fights his legal battle with a result that is part defeat, part triumph. As Atticus comes out of the courthouse, the deeply moved town minister tells Scout, “Stand up. Your Father’s passing!”
This dramatization of the touching classic tale is a meaningful work of art.” 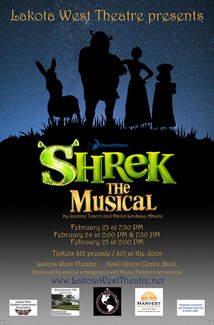 ​Music by Jeanine Tesori
Book and Lyrics by David Lindsay-Abaire.
Based on the 2001 DreamWorks film Shrek and William Steig’s 1990 book Shrek!.
Licensed by Music Theatre International

​“Based on the Oscar-winning DreamWorks Animation film, Shrek The Musical is a Tony Award-winning fairy tale adventure, featuring all new songs from Jeanine Tesori (Thoroughly Modern Millie; Caroline, or Change) and a sidesplitting book by David Lindsay-Abaire. Shrek brings all the beloved characters you know from the film to life on stage and proves there’s more to the story than meets the ears.
​
“Once upon a time, there was a little ogre named Shrek….” And thus begins the tale of an unlikely hero who finds himself on a life-changing journey alongside a wisecracking Donkey and a feisty princess who resists her rescue. Throw in a short-tempered bad guy, a cookie with an attitude and over a dozen other fairy tale misfits, and you’ve got the kind of mess that calls for a real hero. Luckily, there’s one on hand… and his name is Shrek.
Shrek presents a treasure trove of creative opportunities, including costumes, sets, puppets (there is a fire-breathing dragon after all) and more! Irreverently fun for the whole family, Shrek proves that beauty is truly in the eye of the ogre.”